Investing in a single asset class brings challenges and often investors choose to invest after the good times have passed, because they don’t understand the past and future drivers.

Commodities for example, enjoyed a boom time in recent years fuelled by demand driven by infrastructure projects in emerging markets (especially China). This demand has declined significantly and is unlikely to return. It is not that you can’t make money from commodities it’s just investors need to accept lower returns and greater volatility.

One sector which appears different is agriculture. It remains a volatile asset class but the fundamentals required for a long term investment strategy are positive.

The argument for agriculture is a simple one and that is one of supply, the global population is growing with the key drivers from frontier and emerging markets. As people in these markets become wealthier they turn from traditional foods to more meat based foods.

These countries have struggled to provide the types of farms required to deliver a supply source to meet this demand, Brazil is perhaps the only exception to this.

This means that the West remains dominant in this area. The problem is that although since 1970 there has been a 12% increase in harvested land, when placed against the increase per capita,  harvested land is effectively reducing as it is still not able to meet the growing demands.

So supply is shrinking and demand is increasing. This is a cyclical sector but the opportunities long term are obvious. And of course scarcity will deliver price increases which make these stocks attractive.

Q: Why did you choose to become an Agriculture Fund Manager?

I started my career as a generalist equity analyst covering the UK, which of course has a large resources component. I found it interesting covering resources in the UK and enthusiastically moved to Barings in 2008 to specialise in resources, initially working on the Global Resources fund. We launched the Agriculture fund in January 2009 and I have been involved with the product since launch. I found the theme fascinating as the world faces a significant challenge to meet the structurally growing demand.

Q: Why should investors consider Agriculture as a separate investment theme or strategy? 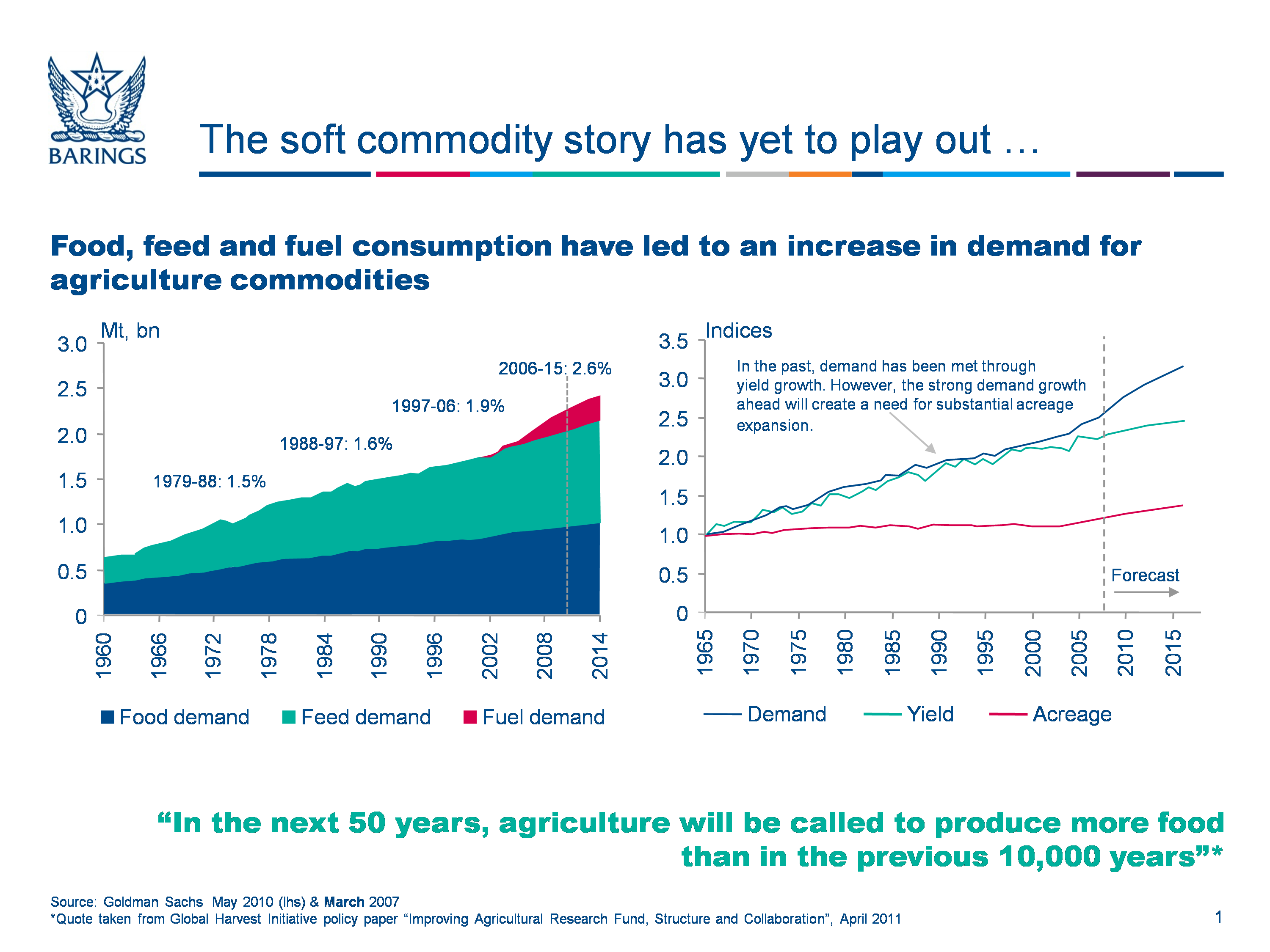 We consider that agriculture is a structural growth story driven by demand – the Global Harvest Initiative estimates that “in the next 50 years, agriculture will be called to produce more food than in the previous 10,000 years”. This demand is being driven by the “3Fs” – food, feed and fuel.

Firstly, increasingly driven by population growth, the UN estimates that there will be 9.6 billion people on the planet by 2050. The second big driver is feed, this is created by increasing demand for protein content in the developing world as their incomes grow. This is particularly relevant as it is very grains intensive to produce meat, for example it takes approximately 8 grams of grain to produce 1 gram of beef.

Thirdly, demand is being driven by biofuels, which are being legally mandated in certain countries such as the US and Brazil. Although corn-based ethanol is being mandated in the US, it is actually the cheapest fuel molecule in the world. Biofuels are significant and corn-based ethanol production is estimated to consume approximately one third of the US corn crop that was harvested last year.

This strong growth in demand creates a significant challenge for agriculture as harvested acres on a per capita basis has been declining and whilst grain and edible oil crop yields are increasing, it is rising at a slowing rate. This should result in high grains and edible oil prices over time and hence strong demand for companies supplying agricultural products and services over the long term.

Q: Is there a difference to theme based investing to country or global investing?

Yes, there is a difference in theme based investing as whilst our universe is smaller, as industry specialists we should be able to identify trends earlier than generalists and there are linkages between different sectors in the industry.

For example, this year we invested heavily in the US chicken industry as we were early to identify the PED virus as a serious issue for US pork production and as a consequence it was likely to result in higher protein prices generally and hence be positive for chicken. These investments in chicken have been very successful.

In addition, we do also have a Global Resources fund at Barings, where for instance our view on natural gas markets is important for nitrogen based fertiliser costs.

Q: Single theme asset classes can suffer negative sentiment and prolonged underperformance, is agriculture as a theme susceptible to this?

Yes, the agricultural theme can suffer from negative sentiment and underperformance as whilst the long term trend in agriculture is positive and growing, there is still cyclicality around the trend.

The asset class had a number of headwinds including declining grain and edible oil prices and the break-up of the potash fertiliser cartel when the largest producer, the Russian company Uralkali changed their strategy in the summer of 2013 to volume over price.

It is important to put this relative under-performance against the broader equity market in context, the absolute performance has still been positive with the GBP A Shares up 10.5% in 2012 and 7.5% in 2013. We would argue that the agricultural asset class valuation does not look over extended when compared to the MSCI AC World Index; on IBES consensus numbers, the fund as at the end of May is valued approximately the same on a P/E basis but delivering much superior earnings growth over the next 12 months.

Q: With a small number of funds in the universe, how does an investor distinguish between them other than through performance?

With themed funds it is first important to establish how the manager defines the universe.

We can invest in the entire value chain, from farm to fork including upstream industries such as fertiliser, machinery, seed and crop protection that benefit from strong soft commodity prices, midstream companies involved in processing and distribution and protein that are more leveraged into higher volumes and lower soft commodity prices and downstream with food manufacturers and food retail. This provides the Barings fund with the flexibility to be able to invest in different scenarios, for example in 2012 when we had the drought in the US and strong crop prices, we invested in the upstream companies and last year with the bumper harvests globally we allocated to the midstream companies that are volume leveraged and gain from cheaper grain and edible oils prices.

Special note: This is not a recommendation to invest in the Baring Global Agriculture Fund. There are other funds available from the likes of Sarasin, Eclectica, BlackRock, ETFs and First State. This not an exhaustive list and potential investors need to consider all options. This is written in a personal capacity and reflects the view of the author. It does not necessarily reflect the view of LWM Consultants. The post has been checked and approved to ensure that it is both accurate and not misleading. However, this is a blog and the reader should accept that by its very nature many of the points are subjective and opinions of the author. This is not a recommendation to buy any product or service including any share or fund mentioned. Individuals wishing to buy any product or service as a result of this blog must seek advice or carry out their own research before making any decision, the author will not be held liable for decisions made as a result of this blog (particularly where no advice has been sought). Investors should also note that past performance is not a guide to future performance and investments can fall as well as rise.