This is part of a series of pieces of analysis and comment on the subject of UK property.

The first deals with the question of why most people believe property ownership to be such a sure-fire winner, and to examine both how it has actually performed as an asset and to understand why certain unique factors have aided the perception of outsized gains and stable prices.

Beyond the fulfilment of a wish to own a piece of this sceptred Isle; buying a house is also thought of by most as being the best financial investment they can make.

But is this actually true?

Using the Nationwide Building Society’s figures, house prices in the UK from 1975 until 2015 have increased in real terms by around 130%. 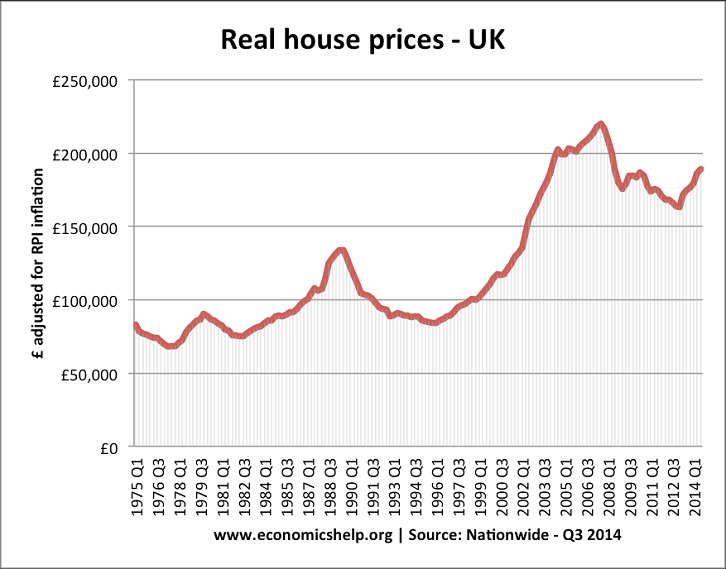 The first thing to note is that this excludes inflation; it’s the measure of the above inflation (or real) increase and therefore represents the actual profit being made (the inflation element is not profit, it simply keeps the value of money the same year after year).

Most people view stocks and shares as volatile and unpredictable, whilst they perceive property as physical, useful and understandable.

Bricks and mortar is far more comprehensible to most than the P/E ratios and discounted cash flow calculations of share analysis.

People generally therefore believe a property investment is literally “as safe as houses” with surveys regularly confirming that the vast majority think it a superior and less volatile investment than equities.

But again is that actually true?

Few people will initially believe the following figures but they are how it really is!

On average in the UK if you bought a house in 1975 the real (removing inflation) value was broadly the same in 1990.

To bring it up to date, the average house price in 2015 is only now equal to the prices paid in 2003; you would in real terms have made no money over the last 12 years.

So why the massive misconception?

Well the first thing that confuses people is the enormous effect inflation has played in the perception of increasing values. 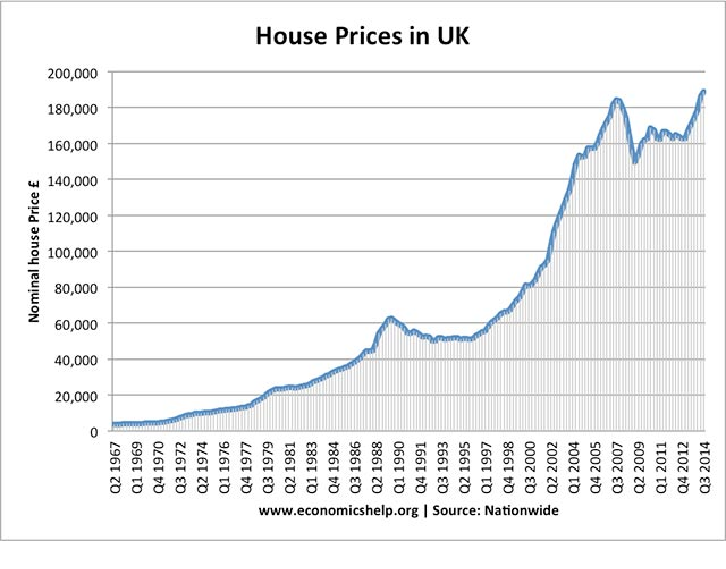 The UK until the late 1990’s had high inflation rates (really only Italy in Europe was comparable and guess what, they love owning property too).

Few people would remember now that the average mortgage rate in the 1990’s was around 12%, by today’s standards that’s unthinkable, but that’s what it was and it was so elevated because we had an average inflation rate of 7% plus for much of the decade.

The real return of 130% on house prices since 1975 will simply not ring true for most, especially those old enough to remember buying a first property for £15,000 and it now being worth in excess of £200,000. Well it will help to put that into context if you factor in that compound inflation is over 800% in that same period (since 1970 a takeaway Fish and Chips now costs over 7000% more and even since the year 2000 a loaf of bread has risen 150%).

As a comparison in low inflation countries such as Germany, there is no significant home ownership culture partly because there has been no high post-war inflation rate.

Far and away the most productive investment method for maximising gains on rising values is to use gearing.

The affordability (cost of servicing as a % of income) of a mortgage (gearing) is historically onerous in the early years of home ownership but over time it eases. 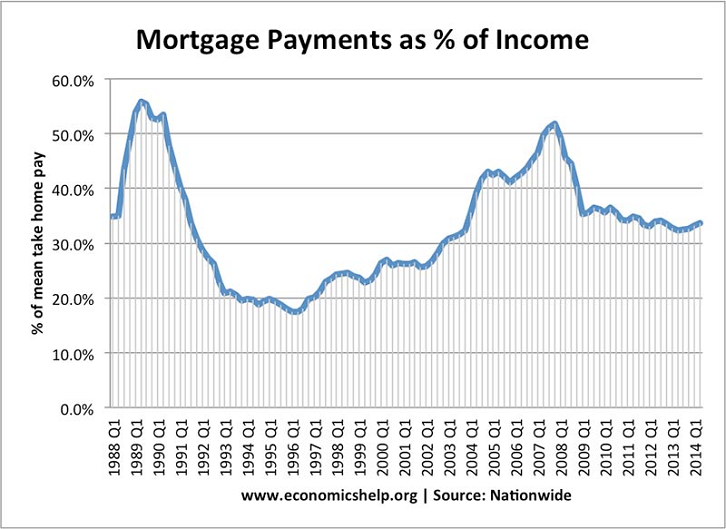 This again is primarily a factor of inflation but more recently also of falling interest rates.

In periods of high inflation, wages will rise each year by the inflation rate as a minimum to keep pace with rising costs (inflation is a key metric for public sector wage negotiations as an example).

So if a mortgage is taken out on a multiple of 3 times earnings, after ten years of 5% inflation those earnings will have risen by over 60%, if they rise say 3% above inflation then they will have roughly doubled.

In simple terms in the above scenario the family income rises over time and assuming interest rates stay the same, the mortgage cost doesn’t. So affordability as a percentage of earnings is down to a borrowing of 1.5 times earnings, which is much easier.

This either allows for a more expensive house to be purchased or for a higher level of disposable income to be enjoyed.

As this is only the first of the pieces there are a number of other factors not yet covered that will need to be part of any balanced conclusion.

It is however possible to conclude that:

This is written in a personal capacity and reflects the view of the author. It does not necessarily reflect the view of LWM Consultants. The post has been checked and approved to ensure that it is both accurate and not misleading. However, this is a blog and the reader should accept that by its very nature many of the points are subjective and opinions of the author. This is not a recommendation to buy any product or service including any share or fund mentioned. Individuals wishing to buy any product or service as a result of this blog must seek advice or carry out their own research before making any decision, the author will not be held liable for decisions made as a result of this blog (particularly where no advice has been sought). Investors should also note that past performance is not a guide to future performance and investments can fall as well as rise.

Also your home maybe repossessed if you do not keep repayment on your mortgage. Source: Information obtained from the Nationwide Building Society.