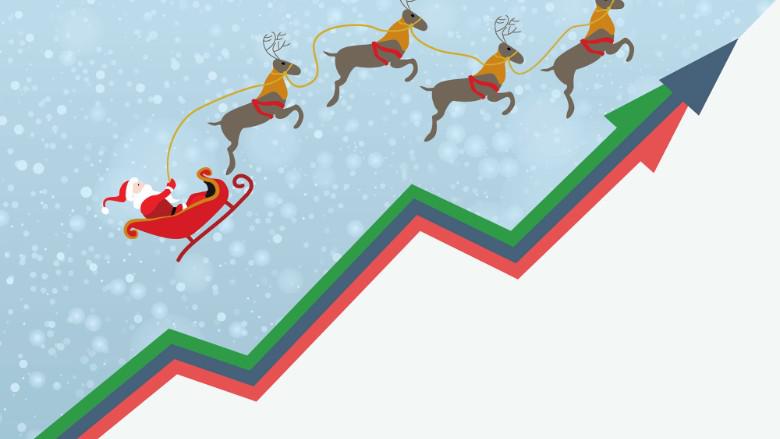 Over the coming months we are planning to focus on how we approach investing, and provide an update on COP (“Good COP or Bad COP”!). However, this month it is Christmas, so we thought we would discuss the Santa Rally and what it really means.

Before I jump into the Santa Rally piece, I am sure many of you are thinking this goes against everything we say. Don’t we always say that investing is not about short-term speculation but about being in the market rather than trying to time the market! We absolutely stand by this. If you look at how long you should hold investments, the normal response is long-term, this being 3 to 5 years.

In 1999 the average holding period was 14 months according to Reuters, this is now just 5.5 months! The power of “knowledge” is that we are suddenly an expert. There is also a sense of FOMO (fear of missing out). We look at bitcoin up over 100% and we rush to buy some, we see a “hot” share on Reddit and so forth. The world is changing and our desire to chase short-term returns develops a fog which, in turn, creates irrational and often costly mistakes.

So, with that in mind, let’s look at the Santa Rally. This apparently goes back to research done in 1942 which showed a pattern in performance in the S&P 500, but the piece that many turn to is research completed by a stock market analyst in the early seventies. This research showed a pattern that, in most cases, between the first trading day after Christmas and the 2 days of trading in the New Year, markets were up. It depends what you look at but on average the S&P 500 is up + 1.33% during this period.

Before we delve deeper, we thought we would test this theory against our Balanced Portfolio.

What does this tell us? In the seven-day trading period, on average, the returns have been 0.90% and 75% of the time the portfolio has been positive. So this seems to support the theory of a Santa Rally, but let’s go a little deeper. Interestingly, after the euphoria of the Santa Rally, January never looks as pretty with just 50% of the time over the last 12 years being positive with an average return of 0.58%.

But if we just take a snapshot we lose sight of what happens throughout the year. Again, using the Balanced Portfolio, the best month appears to be July, being positive 92% of time over the last 12 years, then December at 83%, February, March and April 75%, May, August, October and November 66%, September 58%, and June 42%. So you could argue the worst months are June, January and September, and the best months December and July.

If we switch back to the Santa Rally, what drives the market to rally? There doesn’t seem to be any specific data which explains this but many put this down to the Christmas period where investors feel optimistic for the New Year. It could be people spending bonuses, lower share volumes or even rebalancing of portfolios. Perhaps less volatility during this time gives investors a false sense of security and they buy without doing the normal levels of due diligence.

The “hangover” from Christmas and New Year often rolls into January and we see those returns drift into the beginning of the New Year, and then, like the January blues, the market seems to dip and its often a disappointing month.

In summary, our view is yes, if you look at the data it does appear that towards the end of the year markets have a last rally. The reasons for this are less certain. But with any data we can see other trends throughout the year. Why does June produce such low returns? Is it “sell in May and go away”? The point is that it is sometimes fun to analyse markets and look at trends, but the reality is that the clever investor is not always the person who thinks they can time the market and strategize when the best time is to invest. The shrewd investor is sometimes the one that does nothing.

Enjoy reading about the Santa Rally articles that will no doubt appear in the coming weeks, and yes there appears to be some truth in this, but also note there are other times when markets do well. July in fact appears to be better than December! All the great investors will say that investing is about the long-term, it is not about trading, and markets will rise and fall. but if we keep our eyes on the longer-term goals we will likely be rewarded.

Note: Please remember past performance is no guidance to future performance and investments can fall as well as rise.

November was not a happy month for markets as concerns over the new variant rattled them. Crude Oil, which has seen steady increases over the year, was the biggest faller (on the indexes we follow) in November, down just over -20%. Bitcoin again showed how volatile it can be, down -7% in November. The UK, Europe and the US markets were all down, but the Hang Seng took the hardest hit, making it a miserable year for this market.

What is in, and what is out?

The Invesco CoinShares Global Blockchain UCITS is the third best performer, up +55.8%, and two Indian Funds and a New Frontiers strategy are in the top-10.

At the bottom there are two Brazil Funds, one Latin America Fund and one China Fund. There are no Gold Funds in the bottom-10! The worst performer is LF Equity Income Fund, down -36.1%. We think this is the old Woodford Fund, and over 5 years this is down -82.3%.

Looking at data from the Investment Association, the UK remains unloved, with more money coming out of UK Equity Income and UK Smaller sectors. It seems that the UK remains cheap but unloved and the catalyst for this to change remains uncertain. Global markets again took most inflows, but also inflows to strategic bonds, global bonds and money markets have increased significantly.

Of the net sales in September 2021 of £2,328 m, £1,635 m went into responsible investments. It remains a very small part of the overall investments but clearly taking the market share of assets currently.

In summary, where oil / energy funds have led the charge, we have seen these drop back in November. The Woodford Fund performance is shocking and clearly there will be many unhappy investors. The flows of money out of the UK remains one to watch, and clearly we can see the direction of travel in terms of responsible investments, but this remains a very small part of the overall assets invested in the UK.

On the theme of Good COP, Bad COP, we listened to a session run by Lombard Odier at COP26. The summary from the panel was that we are already in a climate crisis and as it stands heading towards global warming of +2.7% by the end of the century. This is something never seen before and would be disastrous for the planet.

The panel explained that planetary boundaries have kept us within the narrow corridor of temperatures going up and down, but this is changing. The Amazon Rainforest, West Antarctica Ice Sheet, Boreal Forest, Atlantic Circulation, Greenland Ice Sheet, Artic Sea Ice, Permafrost, Coral Reefs, and Wilkes Bason East Antarctic are all part of the planetary boundaries, and four out of nine are outside of the boundaries. This is not good!

We have suffered from years of inaction but this is changing, from government action to individuals wanting change. However, the feeling is that to accelerate it further it is finance that needs to drive the charge to net zero. Although there is a wall of money being invested in responsible products this year, it is still a tiny proportion of all money invested. It is very clear from this panel discussion and insights from the FCA that responsible investing will become part of the mainstream investment landscape, and far from hindering returns, they can provide a diversified source of returns.

We have listened to updates from Alquity, RWC and Fidelity on Emerging Markets, and below are some takeaways:

General disclaimer: The data has been sourced from external sources and although we have looked to ensure this is as accurate as possible, we are not responsible for data they supply. The view on inflation and the market is written in a personal capacity and reflects the view of the author, it does not necessarily reflect the views of LWM Consultants. Equally the views under talking shop are those of individual fund managers. Individuals wishing to buy any product or service because of this blog must seek advice or carry out their own research before making any decision, the author will not be held liable for decisions made because of this blog (particularly where no advice has been sought). Investors should also note that past performance is not a guide to future performance and investments can fall as well as rise.